Most men will suffer from genetic hair loss, here at the Shadi Danin Medi-Spa we can help you to stop and reverse the hair loss.

Contact Us

Save money by buying a course of 3 or 6
Hair loss (androgenetic alopecia) can occur for many different reasons and is more common in men. Identifying the most effective hair loss treatments can be an extremely difficult task. Shadi Danin is an experienced trichologist who can establish the cause of your hair loss, and then provide a tailored treatment it to reverse the process.

No matter what your age or stage of your hair loss, our area of specialism is the treatment of hair loss here at the Shadi Danin Medi-Spa.

We have a wealth of expertise in hair loss and approach each case with sensitivity and care. Using the latest laser technology, sometimes in combination with other treatments, we effectively treat hair loss and scalp disorders with amazing results.

Shadi Danin has over 20 years’ experience in scalp, hair loss and works with the most advanced hair and scalp preparation research by doctors and biologist all over the world and has client travel from afar

2nd generation PRP is uniquely designed by you! Suitable for both men and women

SECOND GENERATION PRP PLATELET-RICH PLASMA (PRP) is a recent breakthrough that has gained tremendous momentum in the fields of esthetics, traumatology, rheumatology and surgery.

Autologous Treatment frees up multiple growth factors (including TGF-ß, b FGF, PDG Fa-b, EGF, VEGF, CTGF) promoting cellular regeneration if given in sufficient quantity and concentration (no concentration limit, from x6 to x14 and more as you can add platelets harvested from a second blood sample of the same patient) to obtain clear and reproducible results.

The major disadvantage of all existing devices, from simple tubes to the most sophisticated and expensive automatic machines, is that it is impossible for the practitioner to estimate the number of platelets contained in the sample. For these reasons, this important parameter, depending on the patient’s constitution and state of health, is consistently ignored. Only the WorldPRP kit allows you to visualize, in a spectacular way, this platelet cloud on the surface of the red blood cells. This allows you to decide whether you need to take a second sample and easily double the number of platelets and the concentration of your PRP.

Finally, the paramount efficiency factor is nothing but the number of platelets released. This data is obtained directly by multiplying the RSI by the volume of the PRP. It allows an objective comparison of the true performance of any device against each other. Our Medium PRP has an index of 18.10; a conventional gel tube 4.76, which is nearly four times as many platelet factors released.

Most common hair loss is called male pattern baldness, most men start going bald in their early twenties and can take typically 15 to 20 years to go bald, nearly half of men in their 50s are quite bald, however some could go bald in 5 years or less.

Full costing for the products and laser treatments are explained at your consultation visit and the patient is under no obligation to make any decisions at that time. We always encourage people to consider the information before embarking on any course of treatment, although it is usually possible to start treatment at the same visit is so desired by the patient. There is a £120 consultation fee which is refunded if you go ahead with the treatment.

I first came to Shadi Danin a couple of years ago and had my hair removed from my back, after seven treatments it is gone, a year later I decided to have my chest and stomach done and I cannot believe the results, I use to look like a gorilla and now I have a lovely hairless body. Thanks you are the best x 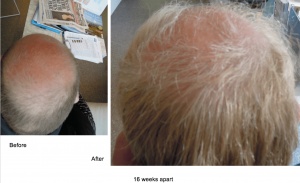 WHAT TREATMENTS ARE AVAILABLE?

PRP (Platelet Rich Plasma) we take a small amount of blood and treated in a centrifuge so that only PRP remains and inject into your scalp.

Mesotherapy treatment is use for prevention of hair loss, hair regrowth and scalp care. The procedure uses a MESO injected gun.

Laser Hair Therapy – A completely painless laser in which over 95% of patients experience re-growth and up to 50% increase in blood flow to their scalp. 100% of women had stablisation of hair loss and stops further hair loss almost immediately as well as an increased in thickness of the thin hair. 13 minutes treatment.

HOW REGULARLY DO I NEED TO HAVE TREATMENT?

During consultation our expert will discuss with you the best course of treatment(s).

WHAT SHOULD I EXPECT AFTER MY TREATMENT?

Immediately after your treatment there will be little or nothing to see on the treated hair, however some people do see little bumps on the injection site which has been known to happen. Patients may experience a temporary soreness that will subside within a day or two.

Massage the area for 7 days following the treatment for at least 15 minutes.

Use heat on your scalp (hot water bottle)